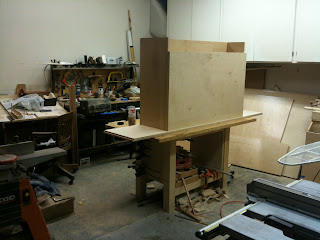 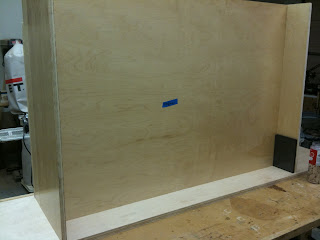 couple hours here, half an hour there...and a week or so later, here we are, at the first dry-fit of the core of the case.
A "dry-fit" is basically an assembly with no glue. You use them to check the fit of parts, and to plan your actual glue-up (where seconds count). The dry-fit is where you find out whether your measure-to-cut ratio was high enough, and if your accuracy was on or off. So far, so good.

So far, there are about 25 biscuit joints in this thing. And they all lined up.
I expect to do a LOT of dry-fitting on this piece - it's going to have to be assembled in stages, and I will need to make sure that I plan the right step in the process to bolt in the 75-lb TV lift mechanism...which by the way has to be perfectly balanced and plumb...
It's actually coming faster than I'd expected - a little time after dinner here and there has really been productive. I find that when I'm not rushing and don't expect to make a huge milestone with each session in the shop, the accuracy goes up as I'm just trying to get each step just so rather than plow toward finishing. When the accuracy goes up, I spend less time fixing errors, scratching my head about how to proceed, and "re-working the design" unexpectedly.

Posted by Jaeson Paul at 9:56 PM No comments:

Back in the Shop Again!

Today, I finally started the actual work on a furniture project I've been designing, planning, and generally preparing for for over a year - my stealth-tansu plasma TV cabinet. Here's what it will look like if I do everything just right... 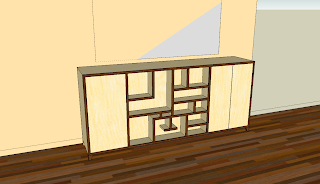 The idea is to have a place for my new 50" Plasma TV to hide so that we don't have to look at the monolith from 2001 lying on it's side every time we walk in the room.
The TV will be lurking in there, waiting for someone to summon it, at which time it will rise from it's slumber behind the false back in the cabinet. Ideally, when you walk into the living room, there will be no sign that a television is even present.
For those who don't know, when I'm not working at my paying job, I spend my spare hours out in my woodshop, which is basically a detached 2-car garage in which I will never park a car, but instead have filled with various machines, hand tools and workbenches. I'm always happiest when I've got a good furniture project going, which really just isn't often enough. 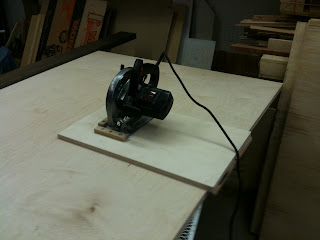 Today, I spent about 4 hours in the shop, and made exactly 5 cuts. The dimensions of the cabinet are 89" long by 18" deep, and the base is 1" thick plywood. Since I don't have a big heavy cabinet saw with a luxurious cast-iron top, using the table saw for this was impractical, and probably dangerous. So I had to use the old SkilSaw, which is always a little tough to control especially when cutting thick stock. I solved that problem by building a fixed sled for the circular saw. Basically, it's a cleat that holds the saw to a piece of plywood with another cleat at the side that rides along the edge. The saw blade cuts through the jig and extends down to cut through the workpiece underneath. Below is a picture midway through a cut into the nice, shiny prefinished maple plywood I'm using for the case. 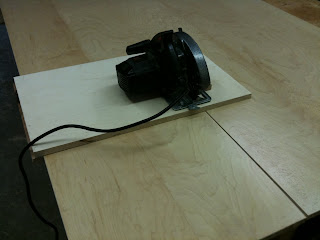 I gotta say, this thing worked like a charm. Managed an 8' long rip through 1" plywood with no wiggles, no burn marks, and leaving two nice, flat, 90-degree edges. The lesson here is: if you think building a jig to make a couple of simple cuts is a waste of time and materials, think again. Trying to make these long cuts with just a straightedge against the foot of the saw would have been dicey at best, and never would have come out as clean.

I finished up my day in the shop cutting the top of the cabinet and beveling the ends for the miter joints I'll be using to join the case.
Next step is to cut the sides of the case. Hopefully I'll be able to get to that next weekend, so stay tuned....
Posted by Jaeson Paul at 9:57 PM 2 comments:

This is My Coffee Cup 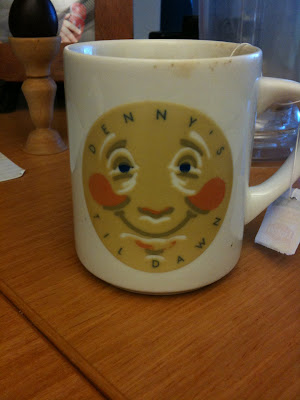 It has been for a very long time. I bought it 20 years ago at my first job after high school. I've had this cup for over half my life.

I still remember acquiring it. There was a Denny's catty-corner from the plaza that housed the Tower Records where I worked. They had these lousy, brown plastic coffee cups in the backroom of Tower, and there were hooks by the coffee pot where people would hang them up, often claiming one particular cup as their own by branding it with a Merlin label bearing their name. I had one of these for a few months, but it quickly started to taste like an old washcloth, no matter how many times or how thoroughly I washed it.

I used to eat at that Denny's a lot. It was open 24 hours, and you could get breakfast anytime. My usual spot was a table back in the "lounge" area - it was dark, sparsely populated, and you could smoke. I got to know the waitresses pretty well, and they knew me. I was fond of the grilled ham and cheese with french fries. Often I didn't even have to order - they'd just bring it out without even asking. Once I only had $2, and was just going to get fries. The waitress brought me out my usual, saying "here's your fries." I don't remember if I ever paid her back, but I like to think I probably did.

The cup was $5, on sale at the front counter. It had this heat-activated design that started out as a blue-grey, mopey-tired-drowsy face that disappeared when the cup was filled with hot liquid to reveal a smiling, cheerful-awake-rosy-cheeked face. I bought it, took it back over to the Tower back room, stuck my name on it in Merlin's heat-transferred Helvetica bold, and hung it on a hook by the coffee maker.

I worked for Tower for about 7 years altogether, at 4 different stores over that time. Did everything from stock clerk, to shift supervisor, to book and magazine buyer, to deposit clerk. Some of my closest friends to this day were part of that first crew. It was the place I met my wife and mother of my children, had some of my most fondly-rememberd youthful indiscretions, and made the connections that ultimately landed me in my current career. And I got this cup.

It's still my "work coffee cup." It's sat on every desk I've occupied since, through 7 companies (including a brief return to Tower during the cold spell after the Internet Bubble burst). The heat-activated feature stopped working long, long ago, and now the face has this ambivalent look - it's mostly happy in appearance and expression, but there's this dim, hazy patina of fatigue overlaying it - most apparent around the eyes.

This cup is almost a totem, a talisman - like one of those "horcrux" things from Harry Potter (the things you read when you have kids...), it's more than a possession at this point; it's become a kind of vehicle for a piece of my self. Like me, it's survived well enough, but has developed a permanent stain, not unlike a well-seasoned Meerschaum pipe, from all the things that have been poured into it and drunk from it. It's loyal - perhaps because nobody else but me would want to have anything to do with it. It ain't fancy, but it's serviceable. It is what it is, and it does the best it can.
Right now it's sitting on my desk, in my office. I'll see it there when I go back in, and I'll take it to the break room to fill it with whatever is in the urn - hot, fresh, mediocre coffee, or tepid, stale mediocre coffee...maybe tea instead, depending on the state of my stomach in the morning. I'll fill it up and drain it several times that day, and the next, and the next. One day it may follow me to a different desk, a different office, a different routine. Or it might stay where it is for years to come.
Either way, I hope it doesn't get broken. I need to keep it for awhile yet. One thing it has always done well and it continues to do well is to suffice. In every way, it continues to suffice. Day in, and day out. Kinda like me.
Posted by Jaeson Paul at 10:28 PM No comments: